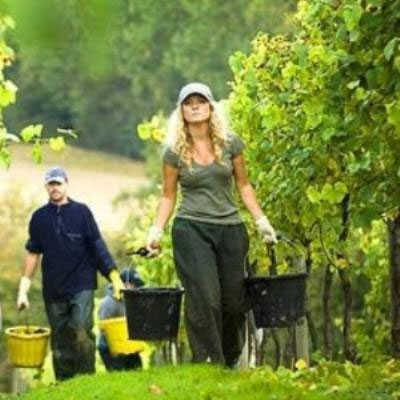 The production figures for the 2014 harvest in the UK have just been released and reveal a significant growth in volume, breaking all industry production records. 47,433 hectolitres were produced last year – the equivalent of 6.3 million bottles (75cl). This represents an increase of 42% in volume over 2013 â€“ itself a record-breaking figure of 4.45m bottles. The figures are compiled by the Wine Standards Branch (Food Standards Agency) from records submitted by all producers post-harvest. Whilst there is currently no official detailed breakdown of styles produced, English Wine Producers (EWP) and United Kingdom Vineyards Association (UKVA) estimate that at least two-thirds of production is now sparkling wine, pointing to a production level of some 4m bottles of sparkling wine from the 2014 harvest. UK vineyards enjoyed a long warm spring and summer in 2014, bringing both quality and quantity. Although the autumn proved cooler than hoped, the grapes came in clean and healthy and in large volumes. Viticultural Consultant Stephen Skelton MW commented: â€œThe last two years have provided excellent growing conditions for our grapes â€“ great flowering weather and a warm summer. The vineyards have produced some very good quality grapes and volumes of still and sparkling wines.â€ The UK Vineyard area has doubled in seven years and now stands at in excess of 2000ha (4,900 acres), the majority of which is mostly planted for the production of sparkling wine. Chardonnay and Pinot Noir are now the most popular varieties, with plantings of these two alone increasing by over 230% in the last 8 years. Production of sparkling wines has increased by nearly 150% in the last 5 years and more volumes are now coming on to the market, from established producers to new English wine brands. (Click to read more)

Still wine production also continues to thrive and 2013 and 2014 vintage white, rosÃ© and red wines are prominently available. Bacchus is the most popular aromatic grape variety in the UK and has been enjoying a steady growth in plantings. It is the third most widely planted grape variety.
Both still and sparkling wines are securing more shelf space on the high street, from multiples to independents; Marks & Spencer have just added significantly to their range of wines, introducing vineyards from across the UK, and Waitrose continue to increase their share of the English & Welsh wine market â€“ now listing over 100 English and Welsh wines and recently reporting a 177% increase in sales of English wines over the same period a year ago. Own label English wines now also feature on several retailersâ€™ lists.
Julia Trustram Eve, Marketing Director of EWP said: â€œOver the last years we seem to be continually breaking our own records, and the 2014 figures surpass everything. Thereâ€™s no doubt about it â€“ English wines really are on an upward trajectory.
â€œWe are noticing the uptake in English wine through the entire retail sector and the on trade. Export is another growing market. There is now a close collaboration between a number of producers already working on export initiatives. As volumes continue to grow, so will our efforts to develop markets both here and abroad.â€
English Wine Week is just one initiative on home turf, running for one week at the end of the month. EWP report a growing number of initiatives within the trade to support this campaign.
â€œThereâ€™s no doubt about it â€“ Englandâ€™s future is certainly a bright one: growing acreage, larger volumes to sell to meet demand, international recognition through competition successes securing our reputation for quality. Added to this, next year the UK is hosting the International Cool Climate Wine Symposium, and It couldnâ€™t be at a better time â€“ that will certainly put our industry at the centre of the world wine stage,â€ adds Julia.