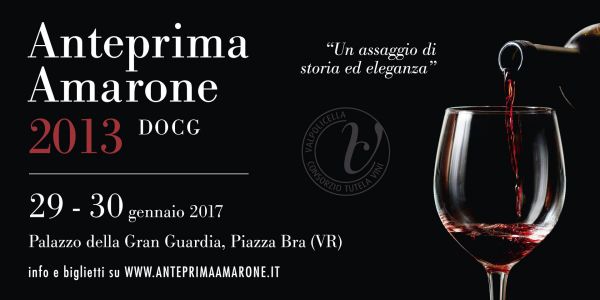 The countdown has begun for Anteprima Amarone, from January 28th to the 30th at Palazzo della Gran Guardia in Verona. Organized by the Consorzio per la Tutela dei Vini Valpolicella, the event introduces the vintage of this great Veronese red wine, just released on the market. We’re talking about the 2013 vintage that the consortium’s committee—which met just a few weeks ago to outline its profile and value—has defined as medium-high-quality. Along with the 2013 wine,  the participating wineries (78 making for over 150 labels to taste) will also present some of their older vintages: a chance to enjoy wines that aging has made even more interesting.
There are various surprises this year starting with the debut of the brand-new wine glass in which the valuable Amarone will be poured. Indeed, a committee of experts selected a model by VDglass that exalts its expression.
Other novelties surround the inaugural day dedicated exclusively to the press.
As opposed to past years the in-depth information on the designation—just like the research from the Observatory of the Valpolicella Wines run by Nomisma’s Wine Monitor on Amarone on the US market, the data on tourism flows in Valpolicella, the update of the “Reduce Respect Retrench” protocol, and the info on the vintage itself—will not be fully presented, but rather described in the press kit. However if anyone so wishes, they can delve deeper into the various topics with the heads of the consortium and the experts, like Denis Pantini from Nomisma, Diego Tomasi from the Viticulture Research Center in Conegliano and Renzo Caobelli, agronomist consultant from the Consorzio Valpolicella. This decision was mad to try to save time for tastings and visiting with the producers. The tasting in the rooms reserved just for press with sommelier service will in fact be available starting at the opening at 9:30 AM until 5 PM.
Sunday, January 29th from 10 AM to 7 PM Anteprima Amarone will welcome wine lovers who are already buying their tickets in throngs online (on faberest.com: info at www.anteprimaamarone.it; you can also purchase tickets in person at the Gran Guardia for €30). Wine buffs will get to indulge themselves pairing Amarone, the star of the show, with the hors d’oeuvres offered up by the Nicolis Restaurant and the creations by the Perbellini Pastry Shop.
For the first time in Anteprima Amarone’s history there will be a third day (Monday the 30th, from 10 AM to 5 PM) entirely dedicated to professionals in the industry who will thus be able to take their time to taste wines and talk business with producers.
Information for the public is available at:
www.anteprimaamarone.it and Facebook.