Vinisud 2017 delivers on its promise : over six thousand of international visitors 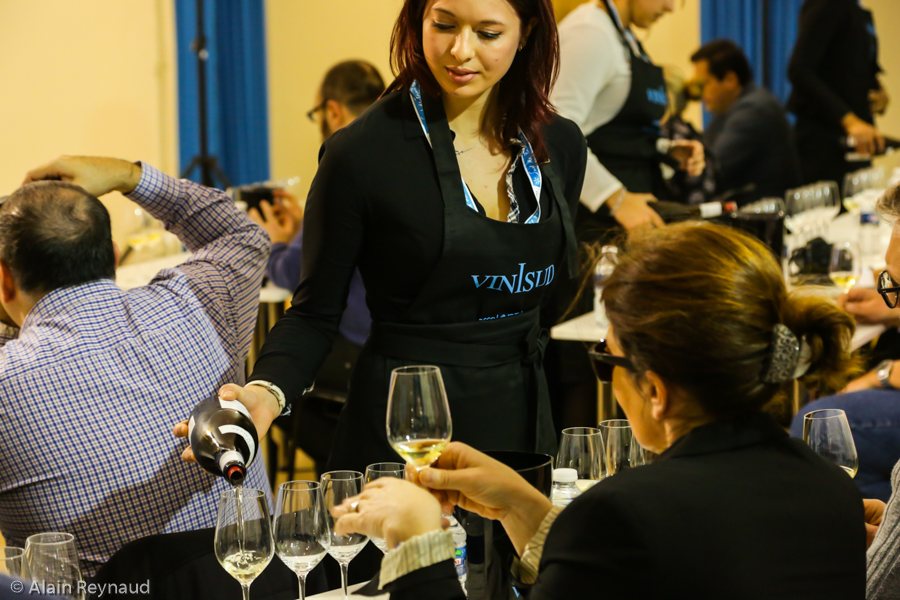 Expertise, discovery and sharing were the three main objectives for the first annual Vinisud show in Montpellier which ended on Tuesday January 31. On all three counts, the gamble paid off. In addition to the number of buyers who attended the show – 20,775 over the three-day event, including 6,673 international visitors from 70 countries – the quality of visitor attendance was praised by the 922 exhibitors.
This year’s VINISUD played a pivotal role, as always, in developing business relations, underscoring the relevance of the show’s annual format – until now it was held only in even-numbered years. Exhibitors praised the quality of business appointments and attendees in general, allowing them to establish worthwhile, well-targeted contacts. Françoise Antech Gazeau who owns Maison Antech in Limoux is one of them: “We are delighted, Vinisud was an excellent show for us […], we met a lot of very professional people. Visitors were there to work and a lot of them were involved in exports, which for us is essential”.
The show also allowed new products and designs to make their debut whilst offering a preview of the latest Northern Hemisphere vintage. Similarly, the discovery aspect of the event was promoted through a number of dedicated free-pour tasting areas – for sparkling and boxed wines for instance, along with the Palais Méditerranéen and its 2,000-strong display – which attracted large visitor numbers throughout the show in an atmosphere that stayed relaxed and conducive to sharing.

GAINING AND SHARING INSIGHT
Over the three-day show, a broad-ranging series of conferences, masterclasses and workshops, including those on the Digital Hub, allowed attendees to improve their understanding of major trends in the global market and thus better market their products. Discovery areas such as Wine Mosaic, a showcase for heritage grape varieties where footfall remained high throughout the event, added an extra dimension to this expertise by providing insight into potential new growth areas for lesser-known grape varieties and wines. Every area generated its own buzz on social media. With a reach of over 1.8 million Twitter users, the hashtag #vinisud2017 took southern wines out to the world.
OPENING UP NEW AVENUES
Echoing the opinion of Jean-Claude Mas of Domaines Paul Mas, who believes that “Wine is not just a product, it’s also an experience”, Vinisud’s organisers rolled out a comprehensive programme of events geared to wine tourism. Although the scale of wine tourism activities differs from one Mediterranean region to the next, the coming years will undoubtedly witness a surge in the number and range of solutions being offered to would-be wine tourists across-the-board. To incentivise stakeholders, Winetourisminfrance.com launched an annual award scheme in 2009. The recipient in 2017, who received her award at Vinisud, was Hélène Cadeau of Hérault Tourisme, in southern France.
The New Wave area, a cluster of start-ups and new-generation wine growers, also proved successful for a first. “New Wave was a really meaningful concept because buyers are looking for new ideas. The actual area itself was impeccably designed, modern and dynamic, mirroring my own PR. It brought me some new clients and I hope it will be rolled out again at the next Vinisud”, said Armelle Tafoiry of Domaine Les Terres d’Armelle in Maraussan, near Béziers.
ANNUAL FORMAT
“All the major shows are annual”, said Vinisud chairman Fabrice Rieu during the official opening ceremony. His viewpoint was shared by Bernard Magrez of the eponymous group: “An annual fixture is better because distributors across the globe are used to travelling and if some of them cannot attend one year, they can come the following year. You therefore tend not to miss out on seeing interesting people”. Brazilian visitor Ari Gorenstein, founder of EVino Comercio de Vinhos LTDA, is of the same opinion: “Every year, the show seems increasingly well organised and conducive to some great reunions. Our entire stay in France during Vinisud is extremely productive and effective”.
The efficient yet relaxed atmosphere of this year’s show thus confirms its place on the list of annual wine trade fixtures, one that both buyers and exhibitors can now look forward to.