Masi Campofiorin: more than 300 million people in the world have enjoyed this wine over its 5 decades of existence 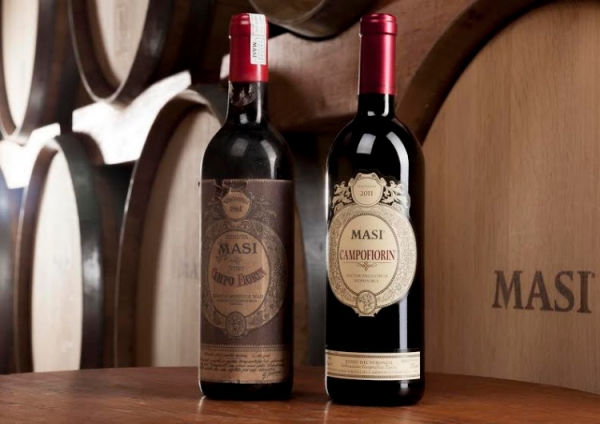 As iconic as a fashion item, red like Italy’s leading brands, from clothes to cars, and an ambassador of Italian style in the world. This is Masi’s Campofiorin, (#Campofiorin50), which with the 2014 vintage now out on the market, celebrates its fiftieth year with a special label on the 75cl bottle format and a serigraphed presentation on the 1.5 litre size in a limited edition of 1964 bottles (as the year of its birth), plus a new advertising campaign designed by the international McCann Worldgroup. The prototype for an innovative category of Venetian wines made with semi-dried grapes, the 50th anniversary edition of Campofiorin affirms its position in the roll call of timeless Italian icons, an example of the authentic Italian creativity that swept the world starting in the time of the economic boom years. “Italian Style” is the concept behind the ad campaign for the fiftieth anniversary of Campofiorin, through its cross-over with fashion, as seen in the red pantone colour that bears fashion stylist Valentino’s name, and Lucio Fontana’s art with its “cuts” that changed the history of painting.
Sandro Boscaini, President of Masi Agricola, comments: “We always thought of Campofiorin as a eureka moment, tailor-made for Masi and our territory. Years later it has a style icon with a unique character, which marks it out just as surely as other icons of its age: the Lambretta LN 125 by Innocenti, the closable TS502 radio by Brionvega, or the curvaceous Ferrari Dino 246”.
The selection of the grapes for the fiftieth anniversary edition is significant: 2014 was not a superlative vintage, so Masi will not make any Amarones from this year. Instead, the best grapes have been used for Campofiorin, which will thus have a superb quality to celebrate an important anniversary.
The release of Campofiorin 2014 onto the market is the last step in a series of celebrations that began with the picking of the fiftieth anniversary vintage (2014), with ageing taking place in a dedicated winery (Tenuta Canova) in the splendid setting of Lake Garda.
Campofiorin was first produced in 1964, thanks to the inspiration of Guido Boscaini (Sandro’s father), as a unique appassimento wine with rich aromas and perfumes, and soft and elegant tannins. It was positioned somewhere between the approachable simplicity of a Valpolicella and the complexity of an Amarone. It was an immediate success, and imitators were not slow in coming forward. In 50 years, it has become a benchmark for the Verona area and has won over more than 300 million people in more than 100 countries of the world, acquiring the status of a classic and a symbol of Italian Wine Style.
50 years of success have also given rise to the Campofiorin Family: a family of wines, which draws its inspiration from original ways of using the appassimento technique that is the basis of its production. These are: the famous Brolo Campofiorin Oro, which gets its character from the addition of a percentage of the rare Oseleta grape variety; Grandarella, a masterpiece of the Refosco grape; the rosé wine Rosa dei Masi; and Masianco, made from Pinot Grigio and lightly-dried Verduzzo, with its new sparkling version called Moxxé.